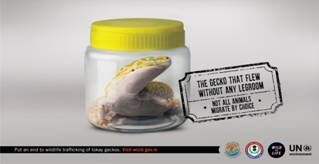 Ahead of the International Day of Biological Diversity celebrated on May 22, UN Environment India and Wildlife Crime Control Bureau (WCCB) of India launched an awareness campaign ‘Not all animals migrate by choice’ to be displayed at major airports across the country. Actor, Producer, UN Environment Goodwill Ambassador and recently appointed Secretary-General’s SDG Advocate, Dia Mirza inaugurated the campaign in presence of officials from the Ministry of Environment, Forest and Climate Change, Wildlife Crime Control Bureau of India, UN Environment, UN agencies and GMR Group.
“A huge global demand for our flora and fauna is a major cause for illegal wildlife trade by ruthless cross border smugglers. WCCB stands committed to fight this organized crime but it is crucial to work together across various government and non-government organizations, private sector and civil society to save wildlife. Our awareness campaign at Airports is a step towards reaching out to the public,” said Tilotama Varma, Additional Director, Wildlife Crime Control Bureau of India