Home > Entertainment > India Pavilion is a hub of ideas and execution: Prasoon Joshi

India Pavilion is a hub of ideas and execution: Prasoon Joshi 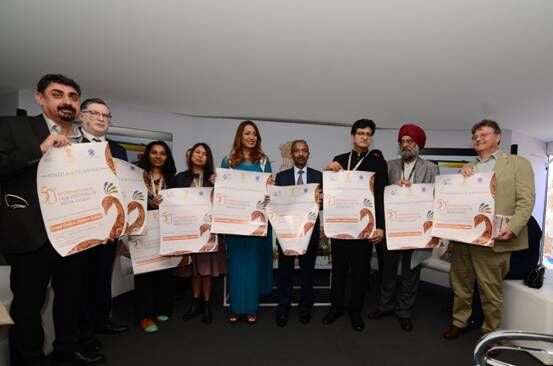 A special IFFI poster marking its Golden Jubilee Edition was also released, along with a comprehensive Film Guide to showcase the importance of the film ecosystem and government incentives to shoot in India.

In his inaugural address Shri Amit Khare highlighted emerging trends in the Media & Entertainment Industry in India. He spoke about the growing importance of regional cinema in the country; the increasing role of states in giving incentive to shoot films, which is an outcome of the realization of interconnect between films, tourism and economy; and the ever increasing focus on technology like Animation and Virtual Reality. Shri Khare also highlighted the steps taken by the Government to ease shooting films in India through Film Facilitation Office that facilitates Single Window Clearance for film-makers. He also said that the Government is exploring avenues to further incentivize foreign filmmakers to shoot in India.

Mr. Jerome Paillard, Executive Director, Marche Du Film, Cannes Film Market highlighted the growing demand worldover of collaboration with India and Indian filmmakers. Shri Prasoon Joshi termed the India Pavilion as a hub of not only ideas but also execution. Ms. Rima Das appreciated the efforts of the Government to promote regional cinema in the country.

The India Pavilion has been set up to showcase Indian cinema across linguistic, cultural and regional diversity, with the aim of forging international partnerships in distribution, production, filming in India, script development, technology, promoting film sales and syndication. It will serve as a platform for the Indian Delegates to meet International Delegates attending the Festival to promote networking with other countries and organizations. The Pavilion will also serves as an information dissemination point about India and Indian Cinema for the Global Film Community.The Indian Delegation will interact with key stakeholders of Cannes as well as other members of the film fraternity during the Festival, along with promoting the Golden Jubilee Edition of IFFI to be held later this year. To take advantage of availability of technicians and skilled professionals, the Delegation will showcase Indiaas a post-production hub to promote collaborations for films with international production houses.