Home > Entertainment > The current trend is of ‘Cinema Loktantra’ – the democratization of movie making in India: Prasoon Joshi

The current trend is of ‘Cinema Loktantra’ – the democratization of movie making in India: Prasoon Joshi

With a vision to explore possibilities of collaboration, Ministry of Information & Broadcasting today organized a Special Interactive Session with... 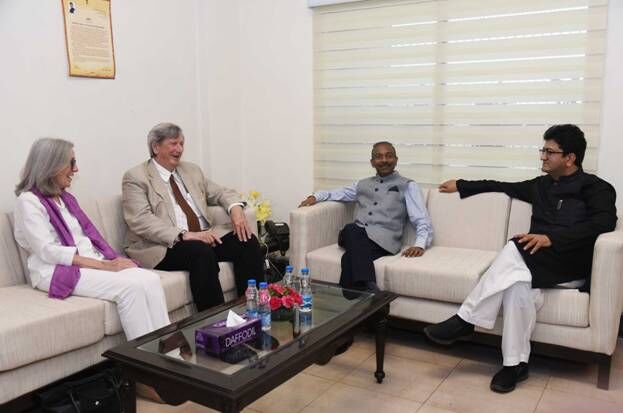 With a vision to explore possibilities of collaboration, Ministry of Information & Broadcasting today organized a Special Interactive Session with...

With a vision to explore possibilities of collaboration, Ministry of Information & Broadcasting today organized a Special Interactive Session with Mr. John Bailey, President of Academy of Motion Picture Arts and Sciences at Siri Fort, New Delhi. The session was followed by an interaction of Mr. Bailey with the press.

In the Session Mr. John Bailey talked about the need to increase the membership of Indians in the Academy of Motion Picture Arts and Sciences. He highlighted the initiative of the Academy to double the diversity of membership in the Academy and added that India truly represents the opportunities, challenges and the unifying power of diversity. Through the interaction, budding filmmakers and students from several Mass Media Institutes got the opportunity to not only interact with Mr. John Bailey - the Academy President, but also with Mr. John Bailey - the master cinematographer. The interaction threw light not only on the nuances behind the craft of cutting edge filming techniques but also helped develop an understanding about creating world class content. Mr. Bailey also talked about the influence of women cinematographers on him. Hailing India as a land of story-tellers, he highlighted the need for filmmakers to tell intensely personal stories. He also appreciated the enthusiasm and willingness shown by India towards deeper collaborations with the Academy.
Shri Amit Khare, Secretary, I&B talked about the abundance of talent across India and the spurt in films being made in regional languages. He highlighted the incentives offered to budding filmmakers by different states and expressed hope that the association with Mr. Bailey and the Academy will help showcase the craft of Indian filmmakers all over the world.

Shri Prasoon Joshi, Chairman, CBFC talked about how Cinema is a part and parcel of everyday life in India; with even life philosophies being derived from Cinema. He highlighted the current trend of ‘Cinema Loktantra’ – the democratization of cinema in India through technology and increased outreach. He also talked about the importance of emotions and songs in Indian cinema, which is different from the kind of cinema known to the Western world, and the need of prior sensitization for audiences in the West to appreciate Indian Cinema. He also talked about the importance of collective viewing of Cinema and the significance of Festivals like International Film Festival of India.