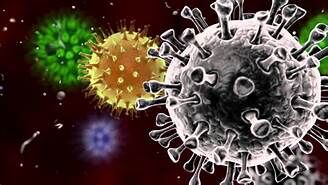 detected in the national capital in 24 hours. The total number of cases in

Earlier this week India became the tenth most affected